I love VMware workstation. I keep VMs around for basically every version of every major Linux distribution, and use them heavily for all kinds of kernel testing and development.

This post is a quick writeup of my networking setup with VMware Workstation, using dnsmasq to assign my VMs addresses and provide a DNS server to resolve VM addresses.

I want to be able to resolve my VM’s hostnames so that I can ssh to them, or run other network services and access them from the host. I could just assign static addresses and put them in /etc/hosts, but that’s totally lame, and liable to be a source of error and frustration, because I have dozens of VMs, and add and remove them frequently.

We’re going to set things up so that when VMs get addresses from DHCP, their hostnames automatically become resolvable, using the .vmware domain. To do this, we’re going to set up a piece of software called dnsmasq, which is a flexible DNS and DHCP server, designed for basically exactly this purpose.

Because I use my VMs for local testing, I just keep most of them on a local NAT on my machine. I configure that virtual network inside VMware as follows (run vmware-netconfig, or follow the appropriate menus): 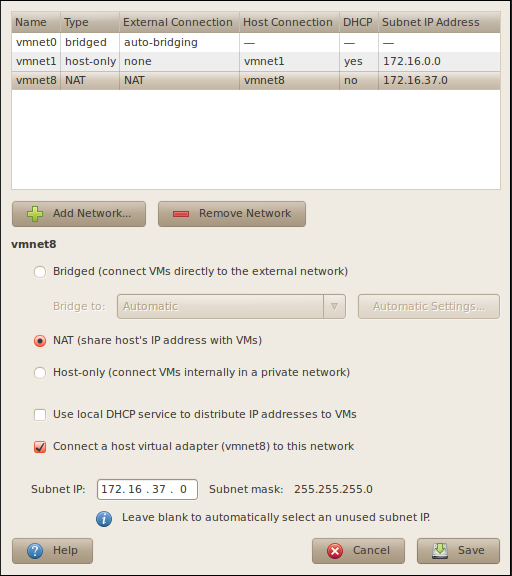 Note how I disable “Use local DHCP service to distribute IP addresses to VMs” – we’re going to set up dnsmasq to prove DHCP, so we don’t want it fighting with VMware’s.

Notice that the subnet I’m using here is 172.16.37.* – if you choose a different one, you’ll need to adjust accordingly later.

Then, I install dnsmasq, and configure /etc/dnsmasq.conf as follows:

Here’s what each of those lines mean, in order:

Here we tell dnsmasq how to forward DNS requests to the outside world. We’re going to be using dnsmasq as our primary nameserver, and having it forward requests for things it doesn’t understand to a real DNS server. In my case, that’s my LAN’s router, at 192.168.1.1. The local line tells dnsmasq that the .vmware domain is local, and it should never forward requests to resolve things in that domain.

If I needed something more complicated, it might be possible to use the resolv-file option or similar, but I don’t, personally.

These options tell dnsmasq not to look at resolv.conf or /etc/hosts when resolving names – we want it only to resolve VMs itself, and to forward everything else.

And finally, we configure the DHCP server. We give it a range of addresses to assign on the subnet we created earlier. I stop at .200, so that I can leave the last few open for static IPs if I need for some reason, and we start at .3 – .1 is the host, and .2 is the address of VMware’s router. dhcp-authoritative enables some optimizations when dnsmasq knows it is the only DHCP server around.

Finally, we need dhcp-option to tell DHCP clients to use the VMware-provided router at .2 as their gateway, instead of using the host, at .1. We could configure the host to be a NAT server using Linux’s NAT, but that’s outside the scope of this document.

We need to configure our guests to send a hostname along with their DHCP requests, so that dnsmasq can add them to its address table. How to do this varies by OS, but most modern OSes do it automatically. If they don’t, here are a few hints:

For RHEL-based distros, edit /etc/sysconfig/network-scripts/ifcfg-INTERFACE, and add a line like

For most other Linux distributions, you can often edit dhclient.conf (usually in /etc/ or /etc/dhclient/) to include:

Or, with a recent dhclient,

will make it look up the machine’s actual hostname.

That’s all there is to it. This is a pretty simple setup, but hopefully someone else will find this useful. If you need dnsmasq to do something more subtle, the documentation is mostly quite good.